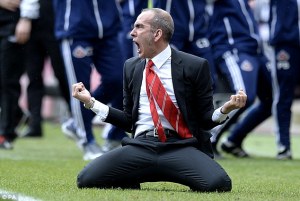 St James Park was stunned into silence as Sunderland comfortably beat Newcastle 3-0. The results leads to big questions over Alan Pardew’s tactical decisions and also sees Sunderland rise 3 points above the relegation zone. Furthermore, it drags Newcastle back into the relegation scrap.

The atmosphere at the start of the match was as usual very noisy and Newcastle fans were very confident. The game started with Newcastle playing their 4-2-3-1 and Sunderland a 4-2-3-1 also. Danny Graham, a childhood Newcastle supporter, led the line for Sunderland, trying to hold the ball up and bring the dangerous Sessegnon into play. Graham constantly outstrengthed Mapou Yanga-M’biwa and had a few half chances in the opening exchanges.

However, it was Newcastle who dominated possession, passing the ball around with Tiote and Cabaye pulling the strings in midfield. It looked like it would be only a matter of time before the deadlock was broken. The returning Mathieu Debuchy was a constant menace on the right hand side, overlapping with Sylvain Marveaux and running in behind the Sunderland defence. Debuchy and Marveaux though were the only real pieces of penetration that Newcastle had, an issue seen against Benfica.

In the 14th minute Sunderland had a big shout for a penalty, with Danny Graham turning Steven Taylor and falling over after being tugged at the shooting moment by Taylor.  The ball almost fell to Sessegnon but Taylor threw his head at it heroically denying Sessegnon a shot.

The lack of penetration suited Sunderland, who were happy to let Newcastle have the ball in front of them. Paolo Di Canio has clearly drilled Sunderland astutely on how to defend and maintain a solid defensive shape. While Sunderland were organised defensively throughout the game, Newcastle once again looked disorganised and shaky, with Tiote and Cabaye being overrun constantly after Newcastle lost the ball.

On the 21st minute Sunderland had another big shout for a penalty, with a Adam Johnson corner from the right being met by Graham, whose cross-come shot appeared to be blocked by the hand of Yanga-M’biwa. Yanga-M’biwa was just three yards away, and his hand was by his side but these sorts of penalties are sometimes given.

The lack of penetration caused Newcastle to try and force passes and it was this that led to Sunderland’s first goal. Jonas Gutierrez tried to play an ambitious ground pass, under nor pressure, after cutting in from the left into Mathieu Debuchy. The ball was intercepted by James McClean who ran down the side of the pitch and found the constant menace Sessegnon. Sessegnon cut in from the right and evaded the desperate Gutierrez, firing a low, right footed shot just past Krul into the corner. Di Canio went crazy on the touchline, realising the significance of scoring the first goal in a big game against a side who Sunderland could effectively keep out.  Gutierrez incidentally had an awful game, leading to questions why the athletically superior Massadio Haidara was benched for Jonas.

My man of the match Sessegnon celebrates Sunderland's first goal

Papiss Cisse perhaps should have immediately replied when the ball flicked through to him after he turned Bardsley. Simon Mignolet was forced into a brilliant save, from Cisse’s toe poke volley, somehow pushing the ball just wide. Newcastle were briefly woken from their slumber, with Gouffran running wide and crossing for Cisse, who wasted another opportunity, hitting a first time left footed shot into Mignolet’s hands.

The pressure from Sunderland caused Alan Pardew to change to a 4-2-2-2, with Sissoko and Marveaux playing out wide, Tiote and Cabaye in the centre and Gouffran and Cisse up front. This change was perhaps the ultimate downfall for Newcastle, causing their midfield to become overrun and tired. The impatience shown by Pardew in changing formation highlights his tactical weaknesses, and also the luck factor which was very strong last season.

A two-footed leap from Danny Rose on Mathieu Debuchy looked red card worthy, especially with the way Howard Webb sprinted over to the incident. Webb deemed the challenge worthy of a yellow card though, much to the Newcastle supporters in that corners outrage.

At the half-time whistle, boos rang around St James for the poor performance that the faithful had witnessed. Sunderland fans, up in the clouds, were delighted throughout the game. Constant chants of Di Canio rained down from their lofty perch.

At half-time Shola Ameobi was introduced for the bright Yoan Gouffran, a strange change but one which was made due to Shola’s reputation as ”The Mackem Slayer”. Shola does indeed have a great record against Sunderland, but perhaps taking off the poor Cabaye or Tiote and moving Sissoko to centre midfield would have made more sence.

Tiote: a shadow of his former self

On the subject of Cabaye and Tiote, I think all Newcastle supporters should be very worried about them. Tiote after starting brightly and winning fifty-fifties, just like he used to, became his current self: a liablility.  Tiote loses the ball a lot, picks the wrong pass and also gives away silly fouls. He is a shadow of the player whom Chelsea were reported to have bid £30million for. Cabaye is a more worrying case. Recently he gave an interview with Sky Sports, admitting to suffering depression after the European championships. France is the most depressed nation in the world, with 21% of people suffering. Whether Cabaye is suffering from depression now remains to be seen, but his body language is different. He also seems less interested and hungry for the football and his recent performances have been very poor.

Anyway, back to the action and after a brief bombardment on the Sunderland goal, Newcastle gifted Sunderland another chance. Adam Johnson chased down a clearance and chased down Debuchy, Newcastle’s most solid player throughout the game. Debuchy attempted to head back to Krul, but did not get enough on the header. Johnson intercepted the attempted head back and tried to lift the ball over Krul from 30 yards as Krul was far out of his goal. However Johnson did not get the required elevation and Krul caught the lob.

Sessegnon then went down easily under an admittedly clumsy challenge from Cheik Tiote. Johnson whipped in a delightful ball from the resultant free-kick which Krul pushed away, landing heavily on his shoulder. Danny Graham tried to head back in to the box but Newcastle cleared the ball for a corner. Krul writhed around on the floor and was substituted for Rob Elliot. The bad news of Krul’s injury was confirmed by Newcastle: “The Dutch international goalkeeper is now expected to miss the rest of the season.” Krul has dislocated his shoulder.

Papiss Cisse on the 60th minute forced another great stop from Mignolet after controlling an aerial ball and striking a half volley from 25 yards. The resulting corner as usual from Newcastle led to nothing. October 2011 was the last time the Magpies scored directly from a corner (a Demba Ba header vs Wolves), surely Alan Pardew needs to work on this in training as corners should be a big chance to score. Newcastle’s set pieces, other than free-kick goals from Cabaye, have this season been awful.

On the 61st minute,  a crucial moment. Newcastle have the ball in the net, Cisse the scorer. Marveaux swings in a free kick which Ameobi nods back to the back post where Cisse slots home. The Gallowgate goes wild, Pardew goes wild, St James goes wild. But wait, what’s this, the linesman flag is up! While this was a terrible decision from the linesman, Cisse was a yard onside, if the goal had correctly stood, it would only have papered over massive chasms. Pardew blamed this decision in his post-match interview, yet Sunderland could and probably should have had at least one penalty. 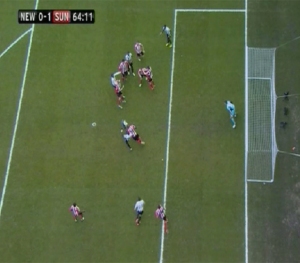 Straight after the goal the poor Cabaye was replaced by Hatem Ben Arfa, the man who made a brilliant impact against Benfica. Again, like the Benfica match, Pardew did not seem to give his side instructions. Newcastle seemed to just be playing a 4-1-5, another reason why Sunderland scored two more goals and another hint that Pardew tactically is very poor. Ben Arfa’s popularity ratings take a plunge, with him heading over a free header from close range after Marveaux beats his man and crosses to Debuchy who nodded back into the centre. Ben Arfa looked very shocked.

ANOTHER penalty claim went unanswered for Sunderland, with Danny Graham again heading a corner against Yanga-M’biwa’s arm. This was the clearest penalty of the lot, with Yanga-M’biwa’s arm being outstretched, however Webb waved play on.

ANOTHER great chance went missing for Newcastle immediately after the Ben Arfa sitter, with Papiss Cisse missing yet again, this time on the 73rd minute. Sissoko, with a typical powerful run, surged past Colback and crossed for Cisse, who put his effort wide. This was a massive chance for Newcastle. It seems like Cisse needs 4 or 5 chances to score this season, and at the top level that is not good enough. Newcastle will need to invest in a better, more clinical striker in the Summer if they want to progress as a team.

It is often said that the best teams in football make teams pay for missing chances. Sunderland did just that. The now exposed, one man, tired Newcastle midfield were cut apart with a speedy counter-attack. The counter-attack ended with Adam Johnson on the right cutting in and somehow keeping the ball. The terrible Gutierrez could not get a tackle in and Newcastle just watched as Johnson smashed past Elliot. It was a brilliant goal and St James was stunned, game over. Di Canio emulated ‘The Special one’ with a run, with pace quicker than Gutierrez, down the touchline, culminating in a knee slide.

The goal, while being against the run of play, killed the game and the atmosphere. It also shattered Newcastle’s confidence and it really looked like Sunderland could score more than the three they got. Vaughan, a second half substitute, received the ball from Sessegnon and fired an absolute scorcher past Elliot, right into the top corner. He was actually marginally offside but the finish was a cracker, left footed and powerful. That really did send the Sunderland fans absolutely mental. Newcastle fans were the quietest I have ever heard them. Even the announcer seemed to stop announcing and he didn’t even say that there were five minutes of injury time, more torture for Newcastle.

On the final whistle, the few Newcastle fans which were still there booed the players and Pardew. Di Canio ran over to the Sunderland fans and pumped his fists. The man oozes passion and commitment. I myself was in a huge state of shock. As much as it sickens me to say this, Sunderland were much better tactically. Defensively Newcastle seem to panic, whereas Sunderland seemed resolute and organised.

Ruining Newcastle’s fans reputation but the derby means a lot

Trouble after the game was seen at Newcastle station as bins were burnt and Newcastle fans tried to stop Sunderland fans getting on the trains. Three Police Officers have been injured. While I certainly do not condone the actions of this small minority, it really shows how losing to your local rivals hurts people and a place. I also have heard rumours of a £2000 bet on Rafael Benitez being appointed the next Newcastle manager not being accepted by the bookies. Alan Pardew while guiding Newcastle to great success last season undoubtedly had a lot of luck. However, tactically his decisions have been bewildering, Cisse at right wing being a good example. While I am not calling for his sacking he certainly has questions to answer and it would be nice if he blamed himself for a defeat instead of a refereeing decision. Benitez would bring more tactical nous and European experience.

Credit must go to Di Canio and Sunderland.